Carl Erik opened his eyes
and looked around
the strange room.
It was not a dream.
The long, hard journey
from Sweden
was really over.
He was in Minnesota!

Carl Erik Larsson's trip from Sweden has finally come to an end, but now new adventures and challenges await: Carl Erik must learn to speak and read English, and deal with the school bully. He is frightened when he learns their nearest neighbors are Indians, and when his father and uncle leave to work at the logging camp, Carl Erik has to become man of the house and help feed the family.
Is he up to the task?
Is he brave enough?
Will he ever feel at home
in this strange new land?

Anna Stina moved closer
to her cousin.
She had not seen him
for two years,
since the day
she left for America.

"Is it true you ate bread
made from tree bark?"
she asked.

"Yes," said Carl Erik.
"We were starving in Sweden.
It was all we had."

"Sit here," said Miss Lind.
"You will share a book
with Ralph."

Carl Erik had learned to read
in Sweden, but the letters
in Ralph's book
did not make words
he knew.
He stared at the strange words.

Carl Erik knew
he was not dumb.
He would show
that bully Rolf!

He was already good
with numbers,
and he would work hard
on his English.

Miss Lind let him
borrow a book.
He read for Anna Stina
on the long walks home.

He even read
when he did his chores.
Please e-mail me with any questions or comments.

AT HOME IN A NEW LAND

Sorry to say, At Home in a New Land is no longer in print.

You may be able to find it in your library, or buy it used.
Please email me if you're having trouble finding it. 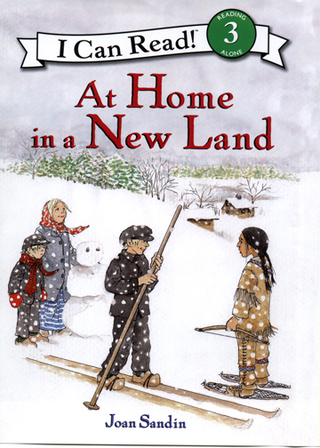 ISBN: 978-0-06-058077-3 The third book in a series about Swedish immigrants to America, published by HarperCollins. The first and second books are THE LONG WAY TO A NEW LAND and THE LONG WAY WESTWARD.

During the "hunger years" of 1868 and '69, more than 50,000 Swedes came to America. Most went westward to find jobs in the cities or to farm the free land created by the new Homestead Act. America's interest in attracting new immigrants was huge; the expanding young country needed workers and farmers.

Many Swedish immigrants settled in Minnesota, which reminded them of Sweden with its woods and lakes. Often they had family or friends already there who could help them.

By 1870 some 20,000 Swedish immigrants had built their own communities and churches in Minnesota, where they could speak their own language and live among their own countrymen. However, in the American schools, the immigrant children were required to speak English, both in the classroom and on the playground.

In time the Swedes, like other immigrant groups, adopted the language and customs of their new land, while never entirely forgetting those of their mother country.

...Watercolor and ink illustrations add realistic detail to a story that reveals Carl's lifestyle and warm bonds with his family and friends. The text highlights an American Christmas celebration in the 1860s. An author's note on the final page explains the immigration experience of Swedish families during the "hunger years" of 1868-69. With its large print and generous white space, this book provides a solid introduction to historical fiction for early readers.

The journey begun in Sandin's I Can Read title The Long Way to a New Land and continued in The Long Way Westward culminates here for young Carl Erik, a Swedish immigrant, and his family as they meet up with relatives in Minnesota. This gentle yet balanced view of nineteenth-century homesteading life shows Carl Erik enjoying comforts from his native land, such as his aunt's cooking and familiar Christmas traditions, while trying to get used to his new home. School is taught in English, and at first the unfamiliar words in his schoolbooks make him feel, as a classmate taunts, like a 'Dumb Swede.' But hard work and the presence of his close-knit family, rendered affectionately in Sandin's ink-and-watercolor illustrations, help him adjust. Still, he can't manage to catch any animals in his traps, and thus he worries that he isn't truly filling the role of 'man of the house' while his father and uncle are away working at a logging camp. Congenial interactions with the Ojibwe neighbors gracefully illustrate the point that it's not Carl Erik's hunting skills but rather his compassion for others that reflects his manhood.

Sandin presents her third slice of Swedish-American history in the venerable I Can Read series. Carl Erik, after leaving Sweden during the "hunger years" of 1868 and '69, now lives in Minnesota with his family and close relatives. Thanks to the Homestead Act, soon 160 acres of land will belong to his family and the long, difficult times will be over. But, in order to clear the land and build the house, Carl Erik's father will first have to make some money, faraway in a logging camp. Carl Erik will now be the man of the house. Frequent charming watercolor-washed black-line drawings show the worry and diligence of the boy. He faces his unfounded fears of the native Ojibway, the anti-Swede taunts of a schoolmate as he struggles to read English and the difficulty of finding food. Sandin skillfully presents this slice of immigrant life through words and illustrations that will both inform and please. For young history students and children wishing to learn more about Swedish immigration.
(author note, glossary) (Fiction. 4-8)